Grill It In a Skillet: Using a Cast Iron Skillet on the Grill 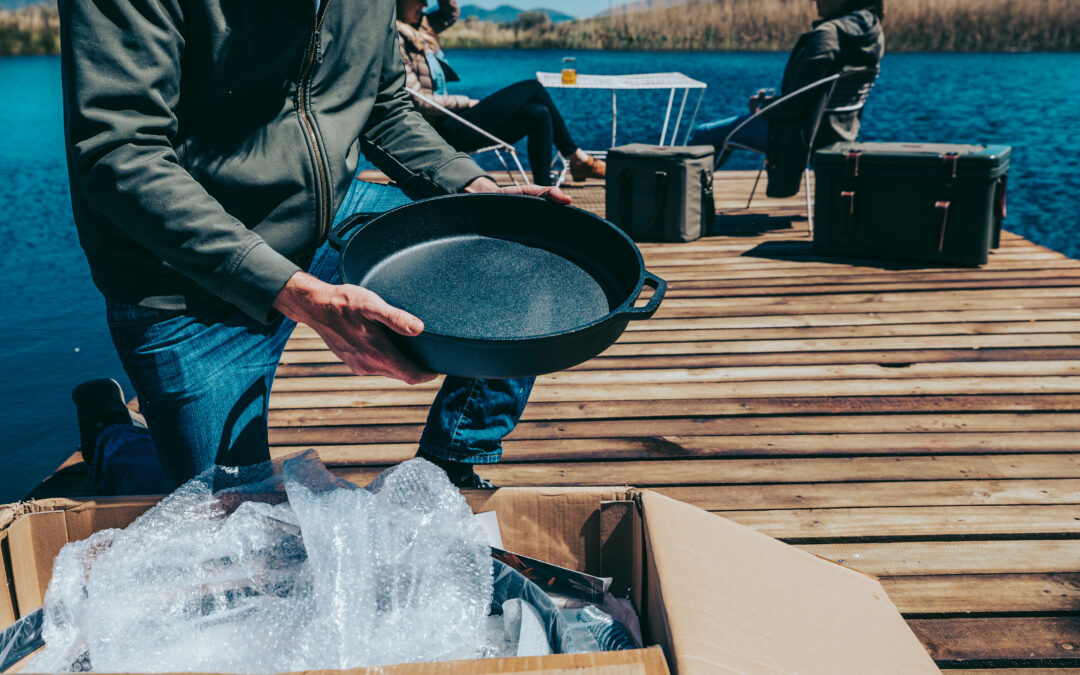 A cast iron skillet is exceptionally versatile, and it’s about to become your next must-have in outdoor cookware. Or at least after you’ve allowed us to explain its wonders. Here are a few tips and tricks for how to use a cast-iron skillet on the grill

Bring the Heat, Your Cast Iron Can Take it

Before you start tossing ingredients into your cast iron skillet, you need to heat it as you would over your stovetop. Let the pan heat up over the open fire for a good couple of minutes before starting your cooking process.

Cast irons have a remarkable ability to absorb and distribute heat evenly, allowing your meals to stay warmer for longer. And even when you remove the skillet from the direct heat source, it will retain the hottest temperature for as long as possible.

And by making use of the KUDU Grill rotation stands, you can rotate your cast iron skillet to grill your food on low and high cooking temperatures. The added bonus?; you can cook multiple dishes all at the same time! Hello, multitasking!

So, you can say goodbye to your food getting cold or running back and forth into the kitchen when you use the KUDU Grill and your cast iron skillet.

Check out our step-by-step ‘how-to’ video below to see how you can achieve this:

You Can Leave Your Stove Off for the Summer

And your next question is probably, ‘Well, what do I make in a cast iron skillet?’. The answer is EVERYTHING! When we said that the cast iron skillet is versatile, we meant it. You can cook breakfast, lunch, dinner and even bake in your cast iron skillet, right over the open fire. This makes preparing meals in summer that much more enjoyable.

No more slaving away in the hot kitchen and waiting on your homemade bread to rise in the oven. With a cast iron pan, you can make your delicious loaf on the grill. And if you’re feeling fancy, maybe even grandma’s famous apple pie.

Just keep in mind that grills create more intense heat at the bottom of a cast iron pan. So, you may still want to stick to using the oven for baking your sponge cakes.

The Secret to Seasoning Your Cast Iron Skillet

Seasoning is the process of heating oil in your cast iron skillet to bond onto the metal through a process called ‘polymerization’. This results in forming a non-stick kind of layer, also known as the pan’s ‘seasoning.’

Our secret to seasoning your cast iron pan involves some flax-seed oil (or any oil with a high smoke point) and the heat of your oven. Rub a thin layer of oil on the inside and outside of your pan. After that, place it upside down in your oven (set at 400 degrees). And then let the cookware bake for at least one hour.

During The Cookout, Things Will Get Heated

On the grill, cast iron can become extremely hot. And the average kitchen towel will not protect your hands from this kind of heat. Leather grilling gloves could help, but you may need several layers to prevent yourself from burning.

It’s often best to leave hot cast iron where it is and give it a chance to cool down before handling.

Cast Iron Grilling Made Simple With The KUDU:

Our online shop has everything an outdoor cooking enthusiast could need, including the legendary KUDU Cast Iron Pan. And like we said, the KUDU and the cast iron pan are made for each other, because it makes grilling so convenient and straightforward.

You can also get your meals done quicker so you can feed the eager bellies of your guests. For example, if you’re grilling skirt steak for tacos and want some refried beans to go on the side. You can save time and make them in your cast iron pan right next to that steak!

Is there anything else on the menu? As long as you have more than one cast iron skillet, you can get all of your ingredients going simultaneously with the KUDU. So while you’re searing your meat, you could be boiling a broth and grilling more delicate foods like vegetables, all at the same time.

Need more outdoor cookware to make your cookouts more convenient and enjoyable? Visit our online shop or contact us and we’ll get you grilling in no time.